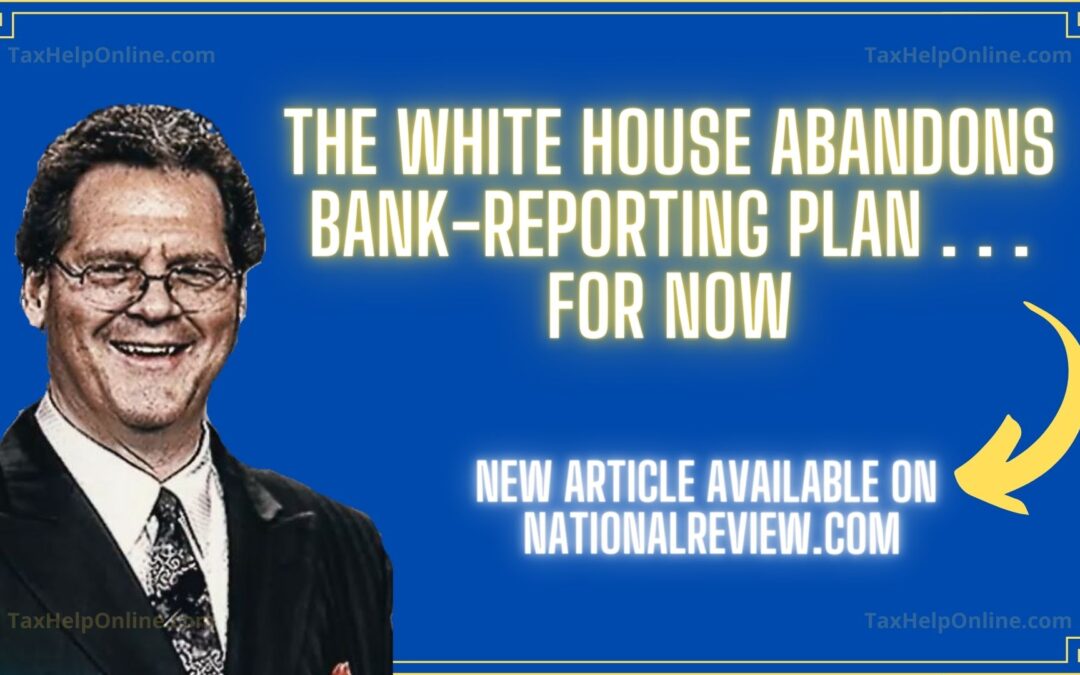 The wildly invasive plan to require banks, credit unions, and other financial institutions to report account data to the IRS on an annual basis was abandoned by the White House…for now. The plan would have required all financial institutions to file an annual report to the IRS on all accounts with “gross flows” of $600 or more per year. What that means exactly is if the total of your account’s in-and-out transactions equals at least $600, your account activity would be reported to the IRS.

The White House claimed that this measure was necessary to track down rich people who don’t pay their taxes. In an article published on the Treasury Department’s web site last month, the argument was made that this reporting was necessary because we have a “two-tiered tax system.” One tier allegedly applies to wage-earners whose income is reported to the IRS annually, and the other to rich people, who are often self-employed and whose income is therefore not necessarily reported to the IRS. For more on this, see my article in August/September issue of PTT, entitled “The Tax Gap Fraud.”

The Biden administration and House Democrats came under heavy fire for this plan, and for good reason. The idea that we must report to the government all financial accounts the in-and-out flows of which exceed $600 in order catch rich tax cheaters in the highest 1 percent of the income strata is pure farce. Don’t the financial accounts of rich people show gross flows of substantially more than $600?

As a result of pressure from me and others (for example, see my article, “Biden’s Tax Plan Calls for Indiscriminate Spying,” published by National Review on 9-27-2021), the administration floated the idea of an upward revision of the threshold. The revised spying scheme would require banks to report to the IRS only if the gross flow in a given account reached $10,000. But even the $10,000 threshold is a farce.

Think about this for a minute. According to the Department of Health and Human Services, poverty level income in the United States for an individual in 2021 is $12,880. That means those on the very bottom of the income strata would still very likely be subject to financial account reporting even at $10,000 per year. How is that any concession of the $600 threshold?

But rather than continue to push for the reporting requirement, even at the revised level of $10,000, as of October 28, the administration scrubbed the idea from the latest version of the tax and spend proposal working its way through Congress. That doesn’t mean it can’t be added back as negotiations continue, nor does it mean it won’t be brought up in the future. The reality is that Big Government never gives up on the idea of gathering private data with as broad a dragnet as possible.

For example, a hidden provision in the Affordable Care Act was a law that required information reporting on essentially all corporate business-to-business payments that exceeded $600 per year. Suppose your small business corporation paid $600 or more in a year to, say, the phone company or a materials supplier. Your corporation would have to report those payments to the IRS on a Form 1099. The rule—enacted as part of the ACA—would have led to an explosion in the number of information returns filed with the IRS every year, just like the $600 (or even $10,000) gross-flows reports would have done.

The difference is that the $600 business-to-business provision actually became law. And once it did, it was met by an avalanche of opposition, led by me, which resulted in its repeal in 2012.

My point here is simple. The idea of IRS invasiveness into every area of your private life is not new—and it’s not going away. They don’t give up. And it doesn’t seem to matter whether Democrats or Republicans control the White House or Congress. The wish list of information gathering tools comes from inside the IRS—from the career bureaucrats who spend their days thinking up more ways to gain access to your private personal and business financial details in the name of enforcing the tax laws.

LOOKING FOR A SPECIFIC TOPIC?
Check out our
INDEX of PILLA TALKS TAXES articles