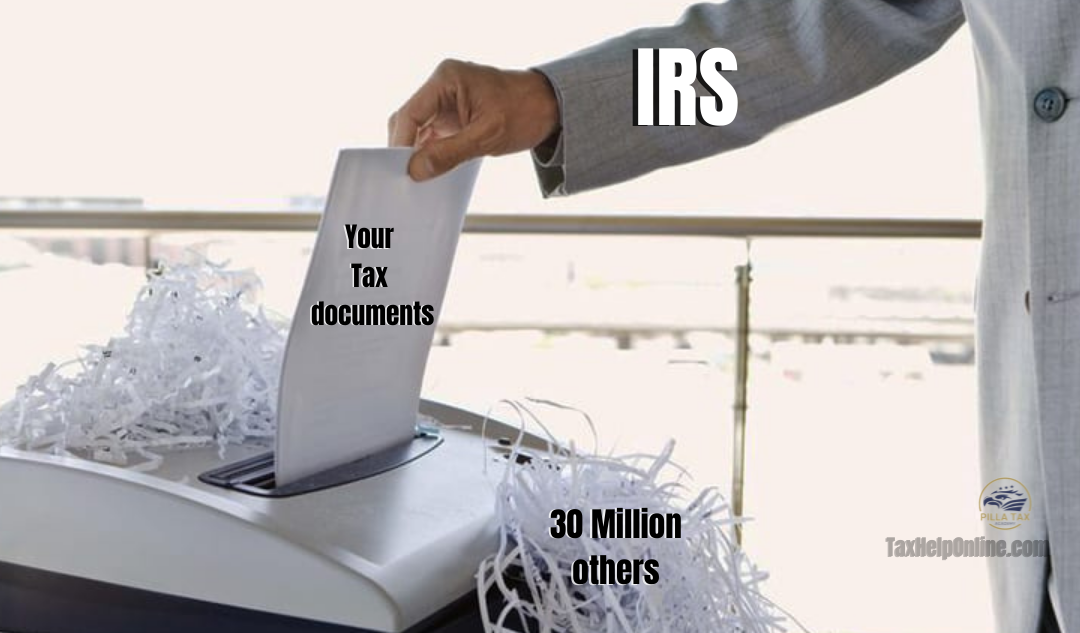 That’s One Way to Catch Up

As the IRS struggles to dig out of the backlog of millions of unprocessed tax documents and incoming correspondence, it stumbled upon a potential solution to the problem: Why not just destroy the returns that can’t be processed? As crazy as that sounds, that’s exactly what the agency did.

In early May, 2022, The Treasury Inspector General for Tax Administration (TIGTA) reported that a year ago, IRS management elected to destroy an estimated 30 million paper-filed information returns because they simply could not process them.

Information returns are Forms W-2 and 1099 (of which there are dozens of varieties). Such returns report payments by third parties to individual taxpayers and businesses. They are used to carry out the computerized process of confirming income amounts reported on tax returns.

For example, IRS computers compare the income reported for a given taxpayer as reflected, say, in Forms W-2, with that reported on the taxpayer’s income tax return (Form 1040). If the W-2s show more income was received than was reported on the return, the computers kick out a notice advising the taxpayer that he under-reported wage income. The notice computes the new tax liability and demands payment of the alleged additional tax owed.

The notices so generated flow from two specific operations: 1) the Automated Underreported Program, and 2) the Automated Substitute for Return Program. The latter program issues notices to individuals with reported income but who have not filed a tax return. According to IRS data, approximately 1.6 million notices under both programs were mailed for tax year 2020.

Information returns are overwhelming the IRS. In tax year 2020, the IRS received over 3.409 billion (that’s with a B) information returns. When combined with the various families of tax return documents citizens and businesses file, the IRS receives about 10 documents for every man, woman and child alive in America today. This does not even address the over 100 million letters and statements mailed to the IRS annually.

And as far as the agency is concerned, the inflow of data is not enough. Every year the IRS presses Congress for more information reporting requirements that would just add to the mountain of data that has already buried the agency. The latest example of this is the Biden Administration’s failed proposal (see October 2021 issue of PTT) to require bank reporting on all accounts with net transactions of $600 per year or more. Even considering that Congressional Democrats revised the proposal upward to a threshold of $10,000 per year, the law would have caused an explosion in the number of information returns collected by the government.

The only solution offered by the IRS and Congress to the overwhelming river of data flowing into the agency is to simply press for new rules mandating the efiling of tax documents. Indeed, the Taxpayer First Act (enacted July 1, 2019) contained three specific provisions (see article below) mandating that businesses efile certain tax returns. Presently about 81 percent of individual income tax returns are efiled, and about 35 percent of business tax returns are efiled.

Either way, the countless trillions of bytes of data – regardless of how it flows into the agency – must still be processed, assimilated and put to effective use in tax law enforcement. The more data that flows into the agency, the less likely the IRS will be able to use it, as evidenced by the 30 million documents destroyed last year.

It is clear that the brain trust in Washington has devised the most inefficient way possible to administer a tax system. But how could it be anything else? Our tax system is based on income. To fully ascertain the correct amount of income tax owed, and to enforce the assessment and collection of that tax, the taxing authority must know everything there is to know about every person: where and how they earn income, where they spend it, the details of their lifestyle, etc., etc. That is to say, the taxing authority must be omniscient – you know, like God.

One of the ten principles of sound tax policy is that the tax system must be efficient. Paying taxes to support the necessary and legitimate functions of government is our responsibility as citizens. But being forced to annually undertake the mind-numbing task of reporting to the government every aspect of one’s private life, and all the interactions one had with others, is simply intolerable in a free society. For more on the ten principles, see my treatise Ten Principles of Federal Tax Policy, available here:   https://taxhelponline.com/wp-content/uploads/2022/03/Ten_Principles_of_Federal_Tax_Policy.pdf

It is well past time that we seriously and honestly discuss the need to abolish the federal income tax and adopt a tax system that does not make every American a spy for the government in the name of tax collection.