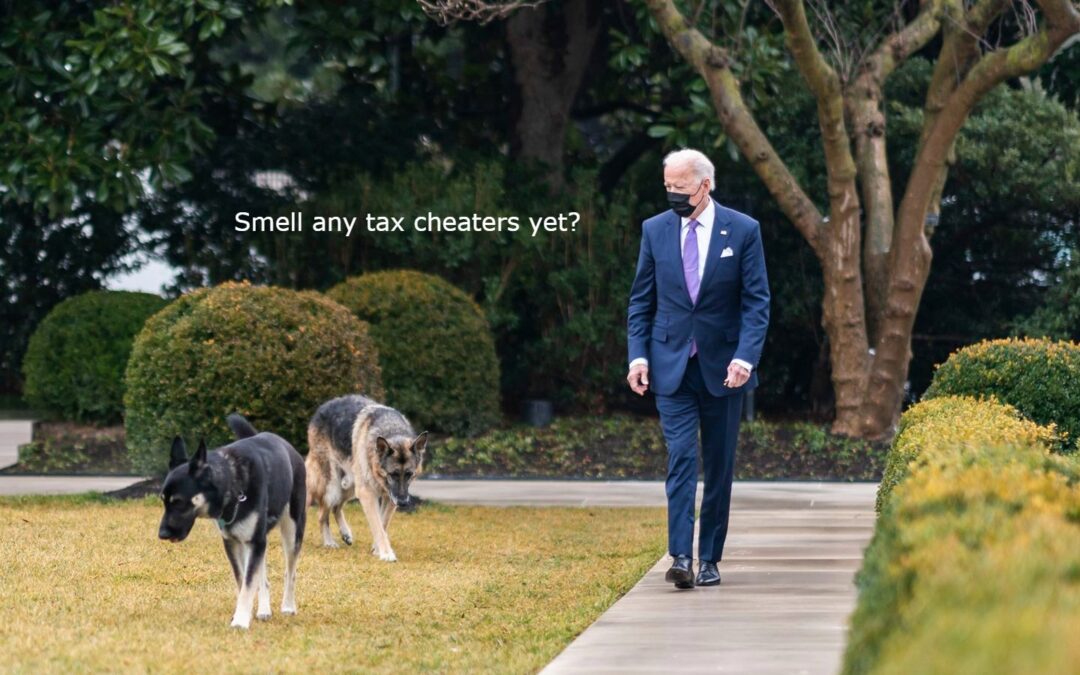 Who Will be Targeted When it Does?

One of the key elements of Biden’s Build Back Better scheme is to spend $80 billion over the next ten years on the IRS. To put this in perspective, the IRS’s fiscal year 2022 budget is about $14.5 billion, which itself is a 10.4% increase over the 2021 appropriation. But the Biden Administration is not happy with just 10% growth in the agency’s war chest. It wants to add another $8 billion a year—for the next ten years—to the budget. The money would be used to increase enforcement action—audits in particular.

The White House claims the increase in IRS spending will raise revenue by $400 billion over the same period. Parenthetically, even if that were true, that would not be enough to balance the federal budget for just one year, never mind spread over ten years.

Biden’s Treasury Department claims that the administration’s tax plan, including the “robust” enforcement activity triggered by $80 billion in additional revenue, will not affect anyone earning less than $400,000 per year.

When one considers who it is the IRS believes is actually cheating on their taxes, we must conclude that it is not high-income people who will be targeted. Rather, the targets will be small business owners and low-income people. This is why business audits were the central theme of the 2021 Defense Conference.

How can this be? Aren’t high income people the one’s cheating on their taxes? The IRS would have you believe this only because if true, the broader public will then be more willing to get on board with the idea of turning the dogs loose on the richest 1% who apparently aren’t paying their “fair share.”

The truth is small business owners and self-employed people will be one of the key targets of IRS enforcement. That is because the IRS believes small business owners cheat on their taxes—virtually across the board. In the IRS’s opinion, small businesses are the number one factor contributing to the so-called “tax gap,” which is the estimated difference between the tax legally owed, compared to what is actually paid. Recent estimates place the tax gap at about $390 billion.

In September 2019, the IRS released a research report in which it claims that almost half of the tax gap is attributable to self-employed people and small corporations, even though they account for only about 15% of all tax returns filed.

The Treasury Department likewise claims that business owners are the primary source of all tax cheating. According to the Treasury, “about half of the individual income tax gap accrues to income streams from proprietorships, partnerships, and S-corporations, where there is either little or no information available to the IRS to verify the veracity of tax filings.” Said another way, according to the agency, unless it has third-party information to verify the claims made by self-employed people, they will and do systematically cheat on their tax returns. This was the primary notion driving the administration’s push for bank account reporting of any account with net flows (in and out transactions) of at least $600 in a year.

According to the IRS’s 2019 research report, the “cheating” by small businesses comes in a number of ways, including,

Because of this, the IRS intends to wage an all out war against business owners. In a September 26, 2019 statement the IRS made it perfectly clear that it will “vigorously pursue those who are not compliant.” IRS Commissioner Chuck Rettig personally piled on, saying the IRS intends to “focus on those who skirt their responsibilities.” According to the IRS, that is small businesses, not the richest 1%.

In light of the Treasury’s claim that the tax gap is attributable to “proprietorships, partnerships, and S-corporations,” it is pure fraud to suggest that self-employed individuals operating under one of these entity forms will not be targeted for enforcement action. The vast majority of self-employed people operate under one of these entities. And the vast majority of those earn well under $400,000 annually.

Now let’s turn our attention to the low-income side of the ledger. Why would the IRS target low-income citizens for audit and enforcement action? After all, they are “low-income.” What’s to be gained by chasing financial ghosts?

Low-income people are the taxpayers who take advantage of the “refundable credits” that are built into the tax code. A refundable credit is one which not only reduces your tax liability, but actually creates a refund of money one never paid into the government in the first place. The best example of this is the Earned Income Tax Credit (EITC). The EITC and all refundable credits are actually welfare programs designed to subsidize low income citizens, but which are administrated by the IRS.

The list of refundable credits is already long and the Build Back Better framework will increase them, particularly with the Additional Child Tax Credit, which is most certainly the foundation for a scheme of “universal basic income.”

The sad reality is that the ETIC is already one of the highest areas of fraud in our tax system. And why wouldn’t it be? Those who qualify for the credit—low-income people—get free money from the government. The U.S. Government Accountability Office reports that improper government payments to individuals are high and getting higher. They went from $151 billion in FY 2018 to $175 billion just one year later.

Perhaps surprisingly to many people, improper EITC payments are third on the list of federal government programs that generate improper (or fraudulent) payments, behind only Medicare and Medicaid fraud. Indeed, nearly 10% of all bogus payments by the federal government in FY 2019 were attributable to the EITC.

So problematic is the EITC that the Office of Management and Budget declared the EITC as a “high risk” program that is subject to reporting by the Treasury in its annual Agency Financial Report. According to TIGTA, the IRS estimates that 23.5% of all EITC payments made in 2022 were issued improperly.

What do you think will happen with the amount of improper payments issued by the government as the list of “hand-out” programs grows under the Build Back Better program?

Make no mistake about this. The IRS is going to chase the money. And as far as they are concerned, they believe the majority of cheating occurs with self-employed, small business owners, and with low-income people claiming refundable credits. That is exactly who the IRS will target going forward.

If you support an $80 billion increase in IRS spending—and the army of enforcement agents that goes with it—because you believe they’re only going after the rich, wake up. There are just not enough rich people out there to make a difference. The IRS is going after Jane and Joe America because that’s where the money is.

This is one of the articles found in the latest Pilla Talks Taxes.  Subscribers have access to the entire issue, including the following articles:

THE OFFSET BYPASS REFUND
Unknown Procedures for an Unknown Remedy

BIDEN ADMINISTRATION INTENDS TO TURN THE IRS’s DOGS LOSE
Who Will be Targeted When it Does?

DEMOCRATS’ MASSIVE TAX CUT FOR THE WEALTHY
By Tom Giovanetti