IS THE IRS COLLAPSING? 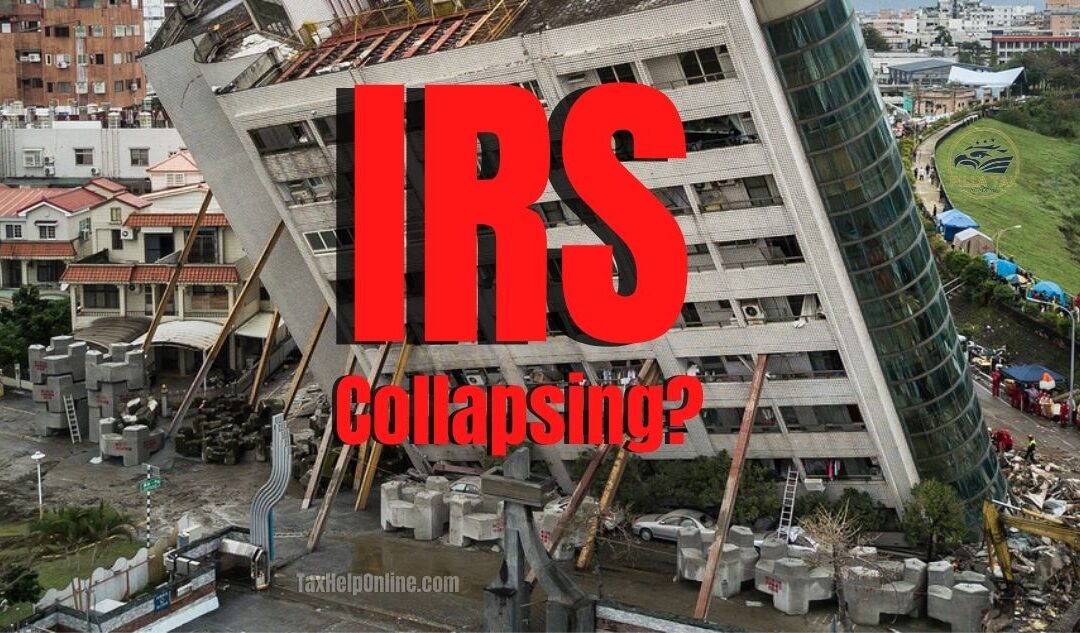 Is the IRS Collapsing?

The Agency is Groaning Under its Processing Burdens

There is little doubt that the IRS is groaning under the burdens of administering the tax code, which now exceeds 4 million words. The question is whether the agency will collapse under the growing weight of the concomitant processing and administrative problems.

Let’s consider a few sobering examples of what the IRS is up against, as pointed out by the National Taxpayer Advocate (NTA) in her 2021 Annual Report to Congress.

In both 2019 and 2020, the IRS received about 100 million phone calls from taxpayers seeking help. That volume of calls was typical over the past decade. But 2021 was quite a different story. That year, incoming calls exploded to nearly 282 million—nearly tripling the load. Moreover, there are no signs that things are getting better, because more people than ever are thoroughly confused and are reaching out to the agency for help.

The IRS refers to its ability to answer the phone and render assistance as the “level of service” it provides. During 2019 and 2020, the IRS answered just 28.7 percent and 24.1 percent respectively, of citizens’ incoming calls. In 2021, that number plummeted to just 11.4 percent. Barely one in every nine people calling the IRS was able to talk with a person. In March 2021, the LOS dropped to below 4 percent, the worst it’s ever been.

The NTA reports that those who did get their calls answered did so after waiting on hold for an average of 23 minutes, but I can tell you—as can anybody who’s phoned the IRS during the last eighteen months—a 23-minute wait time is extremely short. Most people wait on hold much longer, sometimes hours. The published hold time is misleading because most calls are simply cut off (or the caller just gives up) long before the call is answered.

Now, keep in mind that people calling the IRS are taking the initiative to file their tax returns correctly and on time. They are seeking clarity regarding IRS notices and letters so they can comply. A great number of calls are from people trying to make arrangements to pay their taxes. What kind of message does it send to the public when those trying to comply cannot get the help they need to do so?

One of the arguments used to support the push for $80 billion in additional funding under President Biden’s failed Build Back Better plan was the alleged need to equip the IRS to better assist citizens via telephone. I have a hard time believing that any amount of money would be sufficient to build the infrastructure and staff necessary to handle 282 million calls annually.

By the end of the 2021 filing season, the IRS had a backlog of over 35 million unprocessed returns. As late as December 2021, the IRS still had:

There was even an inventory of unprocessed returns from the 2020 filing season, and here we are in the midst of a new filing season in which another 260-plus million returns will be filed.

The logjam of unprocessed returns means citizens experienced long delays in getting refunds and meeting the filing demands of the IRS’s various compliance functions. It also means that citizens were potentially hindered in their private lives, such as with the ability to buy a home, get refinanced, or obtain student loans or business loans. Worse, millions of citizens rely on tax refunds to pay their bills. Delayed refunds means those people likely couldn’t pay necessary living expenses.

The problem with Where’s My Refund, as explained by the NTA, “is that it was non-functional” for tens of millions of people because “it does not explain any status delays, the reason for the delay, where the return is in the process, or what needed to be done.” This lack of clarity meant that millions “went many months without any status updates, and some are still waiting for their refunds.”

What do you suppose is in store for taxpayers this filing season? Let me tell you, it will be more of the same—or worse.

It is beyond question that our current tax system is collapsing, and $80 billion in more revenue will not fix the problem. The system is now far too vast in both scope and complexity, and is only getting worse as Congress stirs the pot with ongoing law changes. Tax reform must focus on, among other things, simplicity, efficiency and neutrality. This will greatly lighten the compliance load for the vast majority of citizens who are overburdened with tax law compliance. My paper, Ten Principles of Federal Tax Policy, offers my full analysis of the ideal tax reform model.

LOOKING FOR A SPECIFIC TOPIC?
Check out our
INDEX of PILLA TALKS TAXES articles